Hopefully this site has provided you with good information about the fruits of what Dwight D. Eisenhower called “the psychological strategists of Communism”. I don’t write a lot of opinion (I meme that usually) but I have done a lot of research on Russian disinformation which entitles me to offer my take on what is going on and what we ought to do about it.

Today, I’m going to start off by remembering screen legend John Wayne as another person who was correct about the threat strategic Communist narratives posed to our psyche as Americans.  Check out the below 1974 video where Wayne talks about the state of Hollywood during the years of the blacklists and makes his position clear.

“I think it was probably a very necessary thing at the time, because the radical liberals were going to take over our business…  At the time it seemed rather serious and they were getting themselves into a position where they could control who would do the writing… Any time that is their opinion, fine — but the trouble there was, that they were spouting by rote somebody else’s way of life; and that’s all right for those fellas over there, if that’s the way they want to live. But we don’t have to have it in our country.” – John Wayne on the HUAC-era in Hollywood

While Hollywood ‘culture war’ is not the most obviously pressing information warfare issue of our time, it has synergies with with our modern condition of ‘fake news’, which is often driven by highly polarizing cultural figures.

John Wayne had it so right that he was the subject of Soviet assassination attempts (popularized by blacklisted Orson Welles, and probably disinformative posthumous urban legends too). Like the similarly maligned Howard Hughes – who was to have been the original capitalist subject of Citizen Kane (thank Orson Welles’ F for Fake for the enduring images of Kleenex box shoes), Wayne stood up against the Communists in Hollywood propaganda.

Though Communism has overtly faded away, hopefully this site has made clear that many of the radical artists apparently still involved in Russian active measures today continue to be influenced by Communism (specifically Trotskyism). It seems obvious the roots of the ‘art war‘ (a.k.a. ‘culture war’ a.k.a. ‘information war’) we are fighting is based in the dialectical processes of Marxism-Leninism. (See my Model of Russian Conspiracism.) 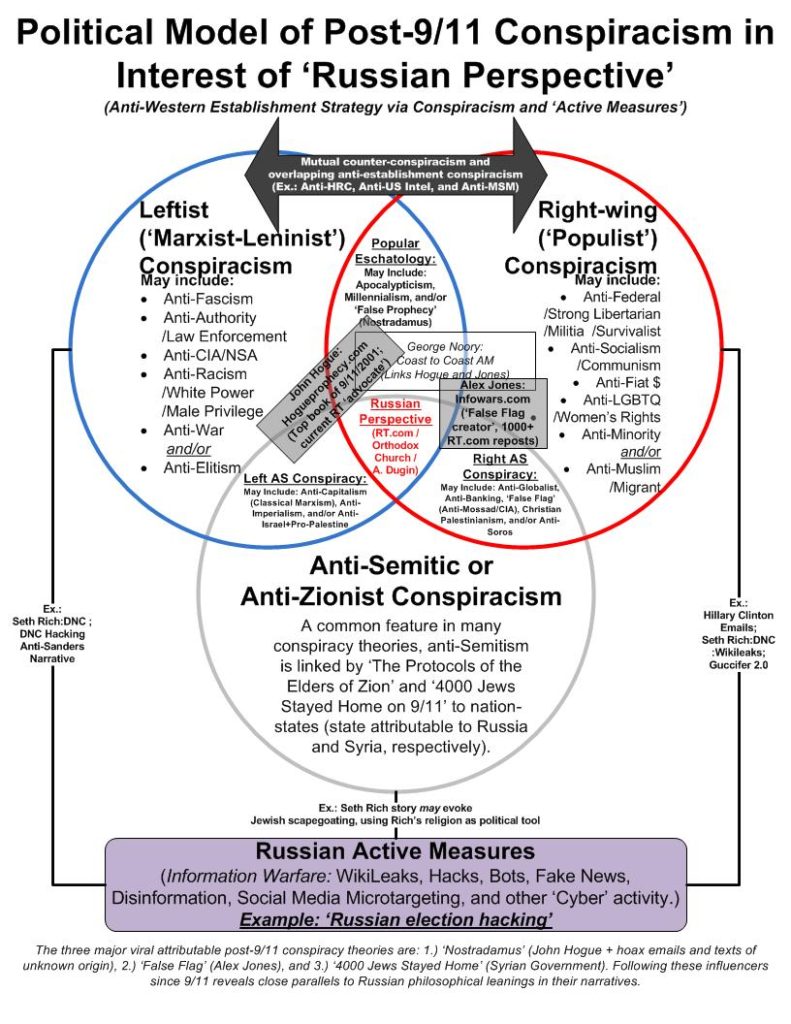 In the past (and to some extent today), it was seemingly Trotskyists and Stalinists who mutually agreed on their antifascism and Communism which put capitalist and democratic institutions in the crosshairs of their warfare, regardless of whether they identified as ‘left’ or ‘right’.

Trotsky’s Fourth International organization primarily espoused anti-Stalinism and anti-fascism as a doctrine. While CIA documents have labeled Trotsky a ‘dupe of the NKVD‘; the same documents make clear that Trotsky’s “entire adult life in the conspiratorial underground had been a rehearsal for revolutionary counterintelligence” and that “his messages to Lenin, Dzerzhinski, and others are replete with instructions and requests relating to intelligence against counterrevolutionaries“. Trotsky had been specifically involved in such intelligence against revolutionary artists and that it was perplexing to many observers that he had no counterintelligence of his own in the Fourth International. Many of his top disciples may have been GPU spies.

Ultimately to the conspiratorially-minded reader, it might appear that Trotsky himself may have been working with Stalin, not only as a ‘Fifth Column’ (1984 Goldstein-like) strawman in Russian domestic politics, but in terms of actively performing a dual counterintelligence and provocateur role of fomenting revolutions abroad as well as identifying hostile persons to be neutralized by the Russian security apparatus. What else can explain his indifference to counterintelligence despite his training and background in such activities and the elimination of many of his close aides?

Russian spies like Alexander Kojeve — the nephew of Wassily Kandinsky — were important in the concept of philosophical dialectics (see also potential person of interest Claude Levi Strauss). Kojeve and Kandinsky were influential on Andre Breton’s Surrealism (whose Surrealist Manifesto was co-written with Trotsky) which has been clearly influential on Hollywood. When he was in charge of establishing a psychological plan for the Russian Academy of Artistic Sciences, Kandinsky also had responsibilities for film apparently. There is ample evidence that Russian psychological strategies — if not the spies themselves have been very formative on Hollywood.

Despite Trotsky’s graphic death, we can agree that that got us talking about Communism; and perhaps even laid down strong messages about Stalin which both crystallized the Trotsky-adherents and terrorized the West. The death of Trotsky did not kill Trotskyism, it solidified it. What a great storyline to keep the revolution going. (Sometimes I wonder if Litvinenko had served a similar role to Trotsky in terms of promoting fear of Russia, re-establishing the strength of Tsarist Russia, getting close to subversives, and in promoting the conditions for the so-called ‘new Cold War’ which Russia seems desperate to provoke for what are presumably economic and domestic political reasons.)

Other examples of literal Trotsky vs. Stalin ‘art war‘ dialectics might be noted in the apparently pro-Stalinist artistic perspectives of Cambridge Five member Anthony Blunt, and how those publicly conflicted with the kind of abstract art created by the Communist Picasso (see my ‘F for Fake‘ post). Or how Stalinist-KGB espionage agents like Rudolf Abel used a ‘socialist realism’ style that contrasts with Trotsky-connected styles of primarily abstract art which flourished in the Popular Front and seemingly migrated to America through the Louis Dolivet-Noel Field Russian spy network in the early 1940’s.  (If you peek around the role of French Popular Front figures in the Spanish Civil War, French figures like Pierre Cot (spy) / Andre Malreaux (spy/artist) / and Jean Moulin –  all Dolivet associates – seem to have been close to both Russian state and military intelligence, but there seems a greater distinction between the agents of the groups once Trotsky heads to Mexico around 1936-1937 and Dolivet himself goes to America.)

Anti-establishment culture is alive and well today in art and can in some ways be traced to the propaganda legacy of the Soviets (see Steve Lazarides / Bansky as an example of a highly popular left artist influenced by Stalinist art and modern Russian information warfare). Perhaps this is partly a legacy of the semi-independent ‘GRU’ side and the ‘KGB’-side of Russian intel as influential on art and philosophical culture working independently, yet towards the same goal in our open, free-speech society. Sometimes it seems to me that art and culture are completely ‘unguarded fronts’ in our society, much like our online news sources; and are ripe for exploitation simply because we don’t defend the space or cultivate it in a secure manner that also matches our values and ideals. Contrast this with the persecution of artists in fascist and communist countries throughout the Cold War; and the establishment of authoritarian cyber policies in those same countries today which presaged their defenses against the current information warfare which has been foisted upon us.

Today however it seems objective — as attested by Russian funding of far right movements in Europe, the philosophies of Alexander Dugin, and guys like the aforementioned John Milius, or Ted Nugent, Alex Jones, David Duke, and Steven Seagal — is that while many of today’s cultural warriors have actually ‘communistic’ backgrounds (see Roseanne, Madonna, Michael Moore, Anthony Bourdain, and the Argentos), there are many on the ‘right’ seemingly being influenced, aided, and abetted by Russia in their radicalism too. Considered as a dialectic, and explained by the ‘conspiracy model’ — this seems more about strategic consistency than ideological consistency; strategy which promotes Russia at America’s expense in a perceived zero sum game.

It seems that today, continuing Stalin’s anti-fascism if not his Communism, and crafting America into something which looks like Nazis from a PR perspective might be the actual goal (this may not actually be that different from what actually happened with the Nazis and Russia in WWII). Pitting the irrational ideologies of fascism and communism against  one another, the only consistent message is that no matter what side you are on, the Western capital establishment gets attacked with conspiracy theories — ‘the US government are Nazis, coming to take X,Y,Z away from you, to censor/spy on you.‘; ‘the government are out to Socialize X,Y,Z program!’

Labels of ‘fascist’ and Nazism are some of the most powerful propaganda tools from the legacy of WWII propaganda. Russia has shown it is all too proud to wield it against Ukrainians as Ted Nugent is to refer to gun control advocates as “subhuman Nazi brownshirt punks” on Alex Jones’ InfoWars. What seems to be consistent from Orson Welles to Charlton Heston to John Milius and Francis Ford Coppola is a commitment to anti-fascism. This commonality seems like evidence of a cooperative narrative dialectic to me.

Perhaps this makes sense of Dugin‘s seemingly incoherent ideologies which have embraced the  opposed perspectives of socialist Marxism-Leninism and ‘fascist fascism’ in the context of promoting a Eurasian vision for Putin. See why Russia helps leftists and rightists? They are apparently just attacking the same enemy for the same master, the Russian ‘tsar’. Since large groups of people live their lives with world views mindlessly explained these competing ideologies, it becomes easy to pit them against one another; though they don’t seem to realize it is the same organizations stirring them up on both sides.

In the end, I think ‘entertainment’ takes too much centrality in our identities and plays too big a role in our politics. (This might be true of religion too, and it is related in this case.) That said, it is not like you can censor people; especially not in the era of YouTube and Netflix. There’s simply too much content and too many ways to distribute it. You can’t tell people what to like from an entertainment perspective. Though I do think ratings and warnings should be in the public interest for those who would yell ‘fire!’ in a crowded theater to serve their master who is an enemy of the Western and American publics. At the least, people need to be educated about the conflicting nature of foreign subversion so they will realize that Putin is not any of our friends. Maybe it is ethical to push people to learn by letting them see what Russia is really up to.

To Eisenhower’s fears of “psychological strategists” — our psychology has become so SCREWED by this whole matter of Russian propaganda and nobody is doing anything about it apparently in the narrative space. As far as America goes, I am guessing with no more USIA, the establishment power structure throughout the Cold War which largely avoided transparency about the challenges of foreign intelligence isn’t helping the current public situation; and it isn’t asking for the public’s help either. We’ve allowed the public to be entertained with conspiracy theories rather than making any effort to combat the lies or tell the public the scary truth. Perhaps we’ve even covered lies with more lies to avoid having to deal with it.

I think that is a bad judgement. This PR campaign from hell isn’t just an American problem or a problem of politics any longer, and if it isn’t ‘defused’ something very bad is eventually going to happen (again).

Maybe then you’d start to see some real grassroots opposition to Russian information warfare. At the very least, we’ll need to upgrade our ability to deploy the truth at a large scale, unless we are resolutely determined to be whittled down to nothing as a culture over time. To be attacked perhaps physically even, and then remembered for what we were not. 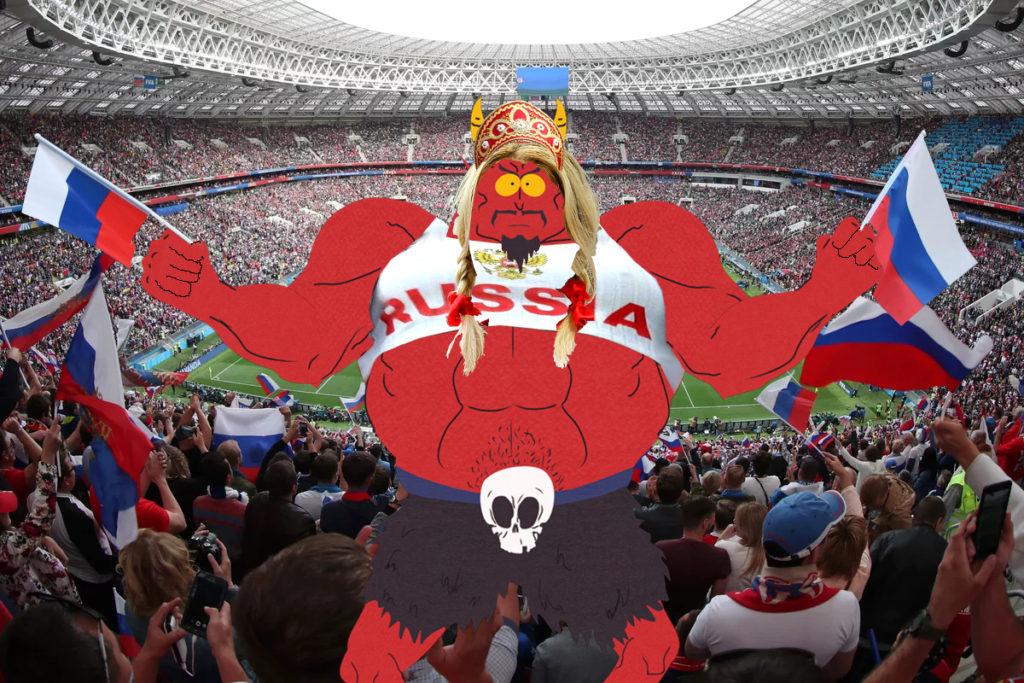 Russia’s biggest fan (and the feeling is mutual, I think); now that Saddam has paired off with Kim Jong-Il and Qaddafi is with Chris; I think Old Nick’s got his love interests set on Prince Vladimir.

P.S. While we’re on the subject of great John Wayne quotes, and doing the moral thing for America; remember  “The Alamo” for positivist American political messaging!