Immediately following the 9/11 attacks, several fake Nostradamus prophecies circulated on the internet claiming the 16th century seer had predicted the crisis. In addition to reflecting clear fabrications of Nostradamus prophecy, the 9/11 fakes also included apparent elements of Baba Vanga prophecy. Baba Vanga (d. 1996) was a Nostradamus-like Eastern European mystic who is “extremely popular in Russia”, and who according to Sputnik News, predicted the 2000 Kursk disaster, the 9/11 attacks, and even Vladimir Putin’s succession of Boris Yeltsin (Sputnik 2010).

An example of a “Nostradamus” prophecy which appeared in the soc.culture.palestine newsgroup one day after 9/11 read:

In the City of God there will be a great thunder, Two brothers torn apart by Chaos, while the fortress endures, the great leader will succumb, The third big war will begin when the big city is burning. – Nostradamus 1654

From the book of Nostradamus

Notwithstanding the first portion was a five-line quatrain signed Nostradamus 1654 (88 years after Nostradamus’ death), the first four lines had been written in a Nostradamus-debunking essay in 1997. The fifth line was added by the hoaxer(s) in 2001 (who has never been identified) (Wilson 2007). The idea of ‘metal birds’ in the second part doesn’t seem to appear in any prior Nostradamus prophecy though – real or fake.

In addition, the popular (and incorrect) idea that Nostradamus predicted a 45 degrees attack on New York City is primarily attributable to the film “The Man Who Saw Tomorrow“, and the apparent Kremlin assets Orson Welles and Erika Cheetham. (Welles also suggested in the film that the rise of Islam is a concern for the West, and that an ‘Islamic Antichrist’ figure would spread Islam throughout Russia and use Russian nuclear weapons to attack the US.)

In the film, Welles intones: “Nostradamus names the first target, a great new city around 45 degrees latitude — experts agree that that could only mean New York” . (Similar views had been advanced in Cheetham’s books since the mid-1970’s.)

This fake prophecy and others like it seem to have driven the public interest in Nostradamus; reflected in increased sales of Nostradamus merchandise and its performance as a search term (Wilson 2007). The Man Who Saw Tomorrow was the number one selling film on Amazon.

NY Daily News reported Lycos personnel as saying “Nostradamus received more searches in one week than any other subject [since we began tracking it] two years ago”. It was also the top search on Yahoo and Google (Megna 2001).

Modern tabloids have claimed that Baba Vanga predicted the 9/11 attacks by saying “”Horror, horror! The American brethren will fall after being attacked by the steel birds. The wolves will be howling in a bush, and innocent blood will be gushing” (Maloney 2017).

Yet another of the 9/11-timeframe prophecies read:

Two steel birds will fall from the sky on the Metropolis. The sky will burn at forty-five degrees latitude. Fire approaches the great new city (New York City lies between 40-45 degrees)

Immediately a huge, scattered flame leaps up. Within months, rivers will flow with blood. The undead will roam earth for little time.

In a sense, it is clear that at least some of the 2001 hoax prophecies integrated aspects of Vanga’s Orthodox mysticism borrowed from the idea of ‘steel birds’ or ‘metal birds’ which may offer a “cultural” attribution of sorts; in addition to having themes which had been popularized by Western figures from the Cold War who were connected to the Cambridge Five ring.

In addition to spiking during the 9/11 attacks, we can see that Nostradamus has since become a viral trend in regions which are engaged in geopolitical struggles objectively involving Russia in Eastern Europe.

While some of the global and regional spikes in increased Nostradamus interest can be attributed to natural disasters or cultural events, they can also be tied to geopolitical crises. Three crises which led to world-leading spikes are the April 2010 spike in Poland, the March 2014 spike in Ukraine, and the August 2015 spike in Hungary.

The following Google Trends representations were performed with the capitalised term ‘Nostradamus’, currently sub-categorised as ‘French Physician’. Data was exported for the worldwide trend and the top three regional trends and combined on a single spreadsheet. Data was charted after transforming the #2 and #3 ranked regions according to their proportion to the #1 rank. (Because the data returned for a query in these instances is an unbiased random sample of non-real time Google Search data, your results might vary slightly) (Google 2017). Google also tells us related topics and searches for these spikes, which helps attribute them to a cause. 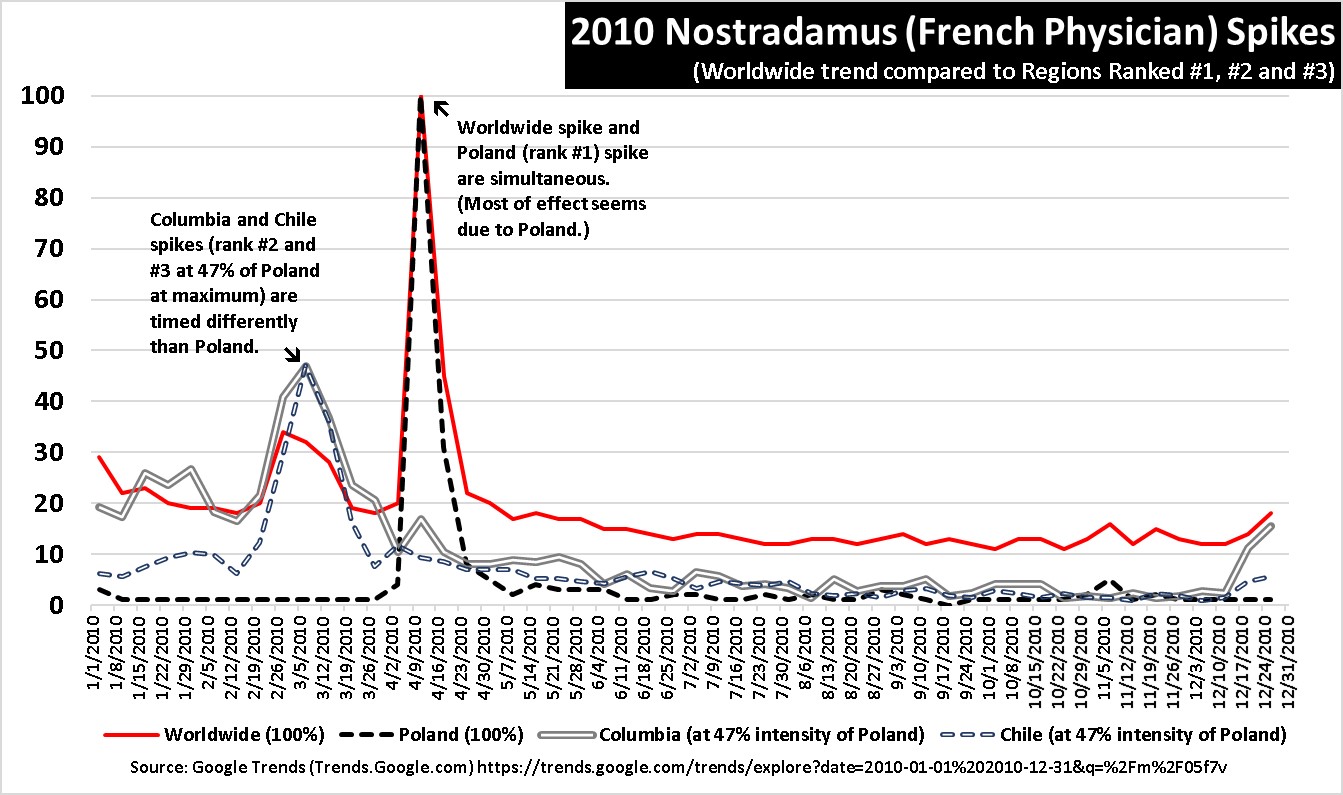 In 2010, an April 11-17 maximum spike was recorded on a worldwide basis and simultaneously in Poland (Figure 2). This was caused by an association between Nostradamus and the death of the Polish President Lech Kaczynski (and other executive branch personnel) in a plane crash at Smolensk, Russia on April 10, 2010. Lower rank regions did not spike at the same time. The majority of the global effect is due to Polish interest (the next largest spike was approximately 50% of Poland).

Immediately following this catastrophe, it was attributed to a faked prediction of Nostradamus (including a reference to a ‘metal bird‘). Simultaneously, conspiracy theories blaming the Russian government for the disaster emerged (Adamski 2010). At the time of this writing, there are legal efforts underway in Poland to prosecute the disaster as a criminal act by Russians. (Baba Vanga was a closely related topic according to Google Trends.) 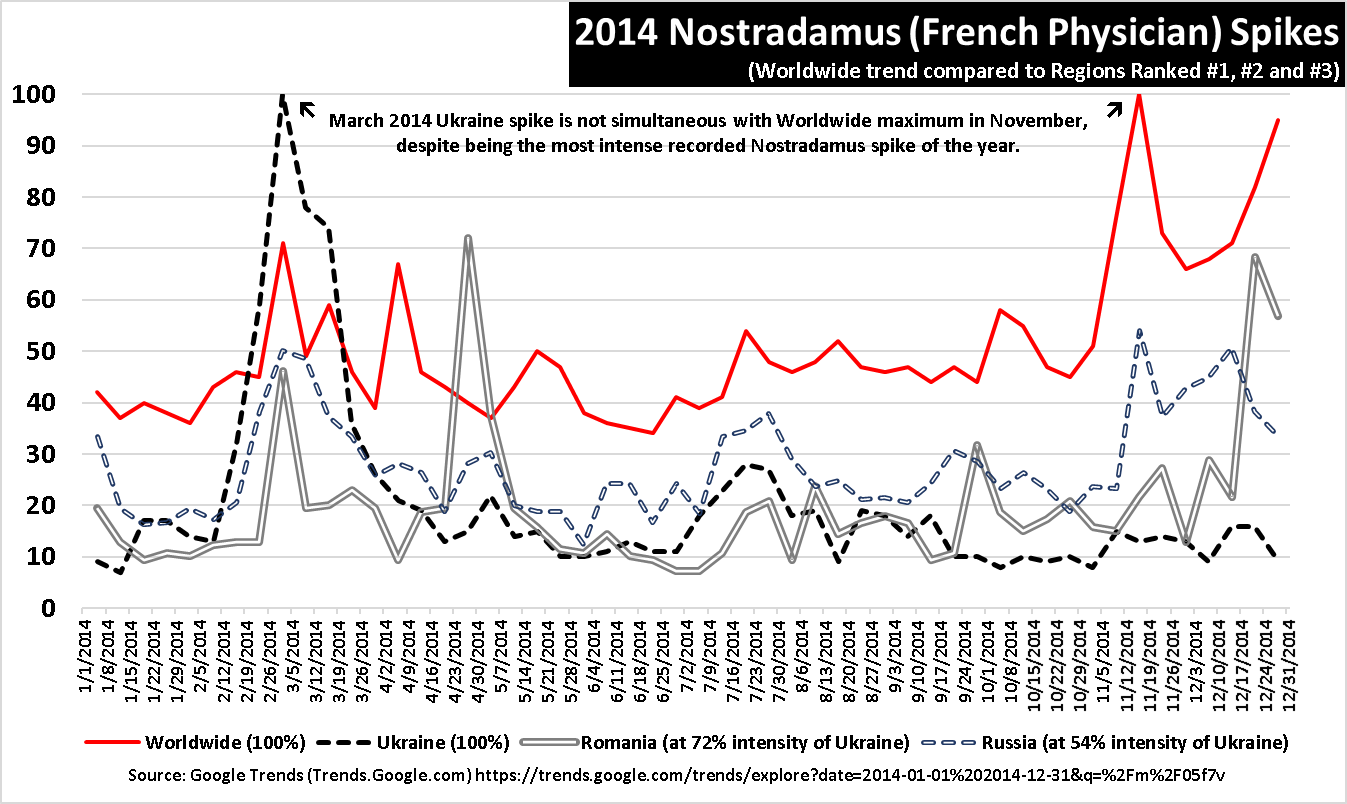 In 2014, the top worldwide spike in Nostradamus interest occurred from November 16-22 (seemingly due to interest in solving Nostradamus-themed puzzles in an ‘Assassin’s Creed’ videogame); but the #1 region in the world for proportional Nostradamus interest was Ukraine (Figure 3). However, this is a ‘wide’ spike and it began in mid-February continuing through March, where it peaked from March 2-8 before subsiding. Within two days of the approval of the use of force by the Russian Duma, the spike escalated to maximum. There was no clear ‘hoax’ found relating to this spike. Many former Soviet Bloc countries (especially Belarus and Ukraine), associate the apocalypse with Nostradamus (Christensen 1998). We cannot say for sure that Russia prompted this spike with information warfare tactics or if it was driven by cultural factors, but we can confidently say that Russia is involved in this spike in public interest in Nostradamus in Ukraine. (See also ‘Nostradamus Ratios: Why is Russia an Outlier?’) 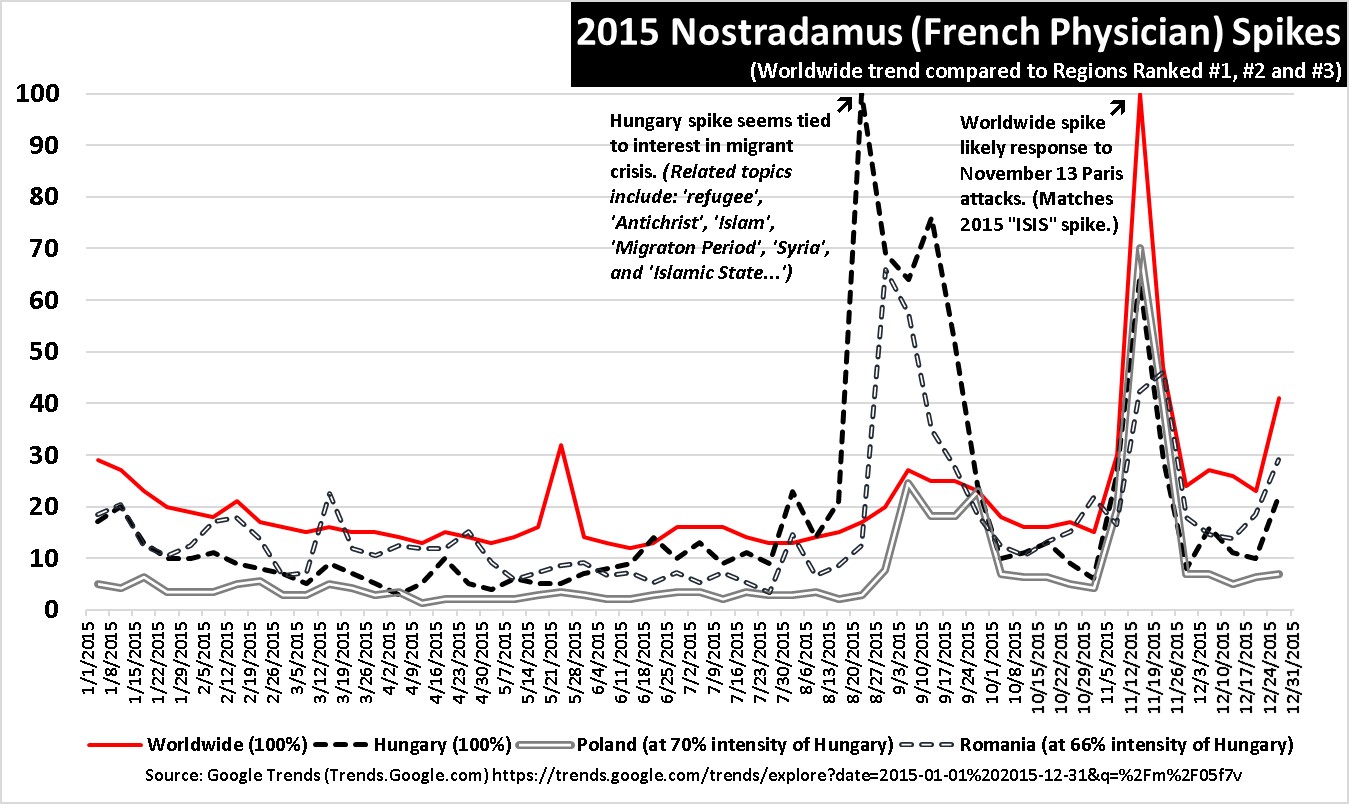 In 2015, the highest worldwide spike in Nostradamus interest occurred from November 15-21 (and seems tied to the Paris terror attacks); but the #1 region in the world for proportional Nostradamus interest was Hungary (Figure 4). The Hungary spike occurred August 23-29 and continued through early September. It was connected to the Syrian migrant crisis, in which former NATO Commander Philip Breedlove claimed that Russia was “deliberately weaponizing migration in an attempt to overwhelm European structures and break European resolve” (Higgins 2016). A sample of 17 related searches from the time of the spike in Hungary includes: “World War III”, “refugee”, “Antichrist”, “Islam”, “Migration Period”, “Syria”, and “Islamic State of Iraq and the Levant”.  These terms correspond to the ‘Islamic Antichrist’ interpretation of Nostradamus. The signing of a military agreement between Russia any Syria occurred on August 26. (A secondary, less intense spike in Hungary in November parallels the global spike.)

Also complementary from a ‘Nostradamus prophecy’ perspective, in August 2015 Russian state-news agency Sputnik published a Turkish language story that said Nostradamus had foretold the Islamic State (Sputnik 2015). After Turkish warplanes shot down a Russian jet in November 2015, RT ran a Russian language story from an affiliate saying a “Greek Nostradamus” had foretold Russians restoring Constantinople to Greece (Gazprom-owned NTV ran a similar story in December 2015) (RT 2015). While these sites do not apparently peddle English-language Nostradamus prophecies, they are notable as state-propaganda organs who give credibility to prophecy. In this case, the prophecies seem tailored to a conflict with a regional rival. Much like the apparent integration of elements the prophecies of Baba Vanga into the 2001 hoaxes in a way which may reflect on Russian thinking, these can be seen to advance Russian political objectives within the guise of nationalistic prophecies.

In particular, the 2001 hoaxes and conspiracies seem strategically intended to damage the US-Saudi-Israel relationship, while advancing Russian-Iranian-Syrian interests. Figures in particular like Alex Jones and John Hogue, who advanced the ‘False Flag’ and ‘Nostradamus’ conspiracies of 9/11 respectively, have also been centrally involved in promoting RT content, as well as promoting the idea of a Syrian chemical weapons ‘false flag’ in concert with RT in the post-2012 timeframe.

Altogether, the pattern continues to fit Russia’s use of prophecy for political ends; such as those prophecies which may be represented by “Third Rome”, “Serafim of Sarov“, “Monk Avel”, “The White Tsar of Asia”, “Protocols of the Elders of Zion“ and many others.

Wilson, I., 2007. Nostradamus: The Man Behind the Prophecies. Macmillan.