This poster accompanies: “Marxist Dracula meets Vlad the Impaler and the Propaganda Men“. I presented this poster at the 2017 ECCWS conference in Dublin Ireland. 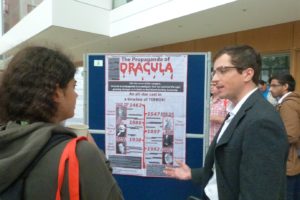 Abstract
Vlad Tepes, also known as ‘Vlad the Impaler’ and ‘Dracula’ was a 15th century Wallachian warlord whose brutality was immortalized in the stories of contemporary European publicists. These stories were brought to Russia and became the basis for Russia’s first belletristic text: “The Tale of Dracula”. The 16th century Russian Tsar Ivan IV (a.k.a. ‘Ivan the Terrible’) was a critical figure in implementing a cohesive Russian mythology, and he was equated with many stories formerly related to Dracula. The first English-language book which combined the concept of vampires and the historical figure of Vlad Tepes was Karl Marx’ “Das Kapital”. There is evidence that Marx influenced Bram Stoker’s conception of Dracula as a character. In the 20th century, film-makers have developed the concept of Dracula in ways which may undermine Stoker’s arguably Russophobic and anti-Semitic context while also introducing 16th century Russian mythology and modern geopolitics to the vampire story.