The biggest worldwide spike in Nostradamus interest since November 2016 (any guesses on Russian active measures centered on November 2016?) occurred following the Notre Dame fire on April 15, 2019. However, unlike most other regions which spiked in interest in mid-April, the North Macedonian spike occurred in early May. It seems to have been directly tied to Pope Francis’ visit to North Macedonia and Bulgaria and included an implicit assassination ‘threat’.

“Roman high priest, be aware not to get close to the town being rinsed by two rivers, because you will spit blood in the month when the roses are blooming” – the hoax prophecy

Helpfully a North Macedonian news fact-checking site wrote a report about the Nostradamus hoax which it linked to disinformation. The hoax seems to have come into the North Macedonian news orbit via a Serbian site (webtribune.rs) which is known to be a source of Russian disinformation. The site has openly pro-Stalinist content. Other stories at the webtribune site reference sites known with good confidence to come from outlets for Russian propaganda in the West (eg. ‘The Saker’).

Partly explanatory for this may be that North Macedonia has recently worked to join NATO which has been met with strict opposition from Russia. There have been reports about Russian influence there since at least 2008, but in 2019 as North Macedonia solidified its name change as a precondition to join NATO (thus removing a Greek veto) disruptive Russian influence directed towards the country seems to have been a significant international news story.

Overall, this may be seen to be very similar to other disinformation campaigns involving fake Nostradamus prophecies which seem linked to Orthodox fundamentalist and Russian nationalist motivations — if not the direct policies of the Putin government. North Macedonia, Serbia, and Bulgaria all have primarily different interpretations of Orthodox Christian faith and it is said that there was Orthodox hostility to the Pope’s visit.

This kind of sentiment by Orthodox may be hardly unprecedented. Even the first Jesuit and Catholic Priest to visit Muscovy as an emissary of the Pope in the early 1580s remarked: “The Muscovites dislike the Latins so much that if they wish evil to somebody they say ‘May they make a Latin of you’” and Tsar Ivan IV described his belief that the Pope was not a shepherd but a “wolf“.

To the point, my current theory is that some Nostradamus prophecy deployed as disinformation is aligned with objectives present in Russian Orthodox fundamentalist ideology (similarly to how Baba Vanga may be associated with Orthodox mysticism as well). As you may know from my prior reporting, the widespread dissemination of faked prophecies seems to be a useful information warfare / propaganda tactic which has been deployed many times by the post-Soviet Putin government (and previously the Soviets and the Tsarists (see Seraphim of Sarov)).

Strategic deployment of such disinformation by actors friendly to Russian nationalist and Orthodox fundamentalist goals may explain spikes in Nostradamus interest in such places as Poland in 2010 and Ukraine in 2014 during obvious national crises linked to Russia.

Despite unprecedented meetings between Patriarch Kirill and President Putin with Pope Francis, there may be evidence of Russian attribution for similar conspiracy theories directed at the Pope and Catholics in the modern day (and the geopolitical circumstances of the 2010 Poland and 2014 Ukraine examples can also fit into this paradigm of competition with Orthodoxy as well via the historical context of Polish Catholicism and Ukrainian Church independence as it may relate to revanchist Russian nationalist perspectives).

Similar to other spikes in Nostradamus interest attributable to Russia, worldwide spikes also occurred in 2005 and 2013 which seemingly respectively correspond to apocalyptic prophecies related to the death of Pope John Paul II and abdication of Pope Benedict XVI. Widespread consumption of the 2005 and 2013 Nostradamus conspiracy theories seems to have primarily occurred in South American and Catholic countries. (Of note, whereas it does not do so for English language speakers, RT serves Nostradamus conspiracy theories to South American and Spanish-speaking audiences.)

While the North Macedonian example is relatively straightforward as an example of probable pro-Orthodox disinformation, spikes in Nostradamus interest related to Papal and Catholic issues may be broadly indicative of a similar Russian anti-Catholic influence campaign that has extended for centuries – from around the time of the idea of Third Rome – to Soviet active measures against Pius XII – to the seeming situation today regarding Russian use of the Orthodox Church as a tool of state power.

Much as Russia is notable for believing it is in cultural war with ‘the West’ – and that being a major driver of the online information warfare environment which Russia notably overloads with conspiracy theories – it should perhaps be pertinent to see how Russia views Catholicism in a quite similar way to the West at large – and may deploy conspiracy theories against it as an information weapon. The 2005, 2013, and (multiple) 2019 examples of spikes in Nostradamus interest on Google Trends may be residual evidence of this.

Edit 10/31/2019: A draft model of conspiracism directed at the west from a Russian Orthodox nationalist perspective. This is taken mostly from the work of Alexander Verkhovsky. (click to expand.) 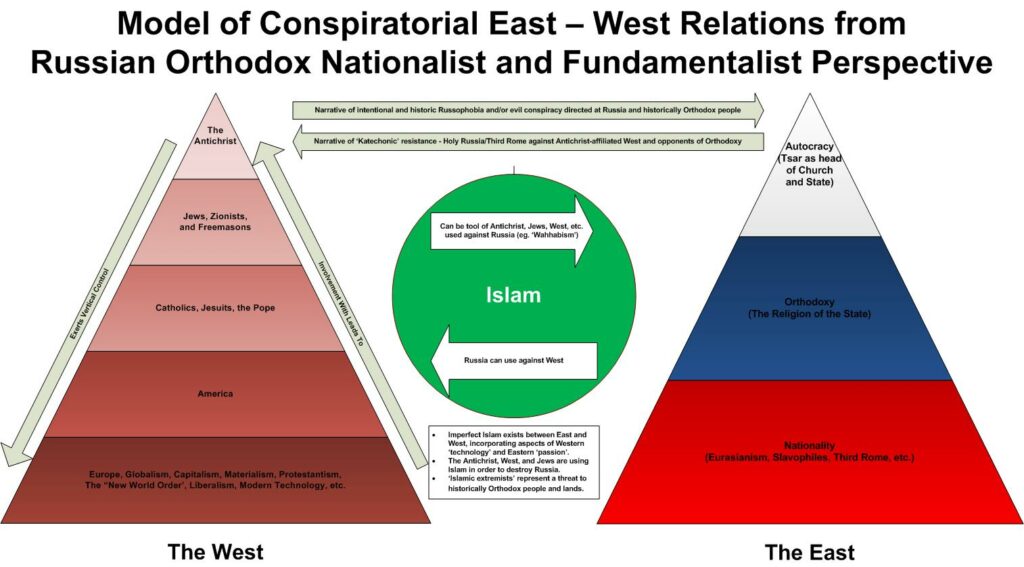