In writing a revision of a paper, I am forced to cut a big section. However, I think it is good enough to post here. This is an expansion of sorts of the biography of Orson Welles and Erika Cheetham I did in the paper “Russian Active Measures and September 11 2001: Nostradamus Themed Disinformation”.  There is quite a bit I could add to this, such as my recent blog on “F for Fake”, or that the huge 1982 anti-nuclear peace rally which Welles was a prominent guest at was clearly inspired by the pioneering 1930’s era peace rallies organized by his political mentor Louis Dolivet. Dolivet had been an inspiration of other prominent figures from the rally, such as Lord Philip Noel-Baker. 1983 FBI reports suggested the rally had been influenced by Soviet active measures at the “highest levels“.

To me, given the Soviet infiltration of the peace movement, and his proximity to multiple “cells” of Russian spies (including peace movement figures), this is all pretty compelling evidence of Orson Welles being a Russian influence asset over time (less so for Cheetham to be honest). But maybe you have a different idea?

END_OF_DOCUMENT_TOKEN_TO_BE_REPLACED

Here’s a little model I whipped up based on my recent findings on post-9/11 conspiracism. I would encourage you to read Ilya Yablokov’s paper: Conspiracy Theories as a Russian Public Diplomacy Tool: The Case of Russia Today (RT) for a greater understanding of how conspiracy theory can be used as an information weapon. Remember, some conspiracy theories ARE state-created. 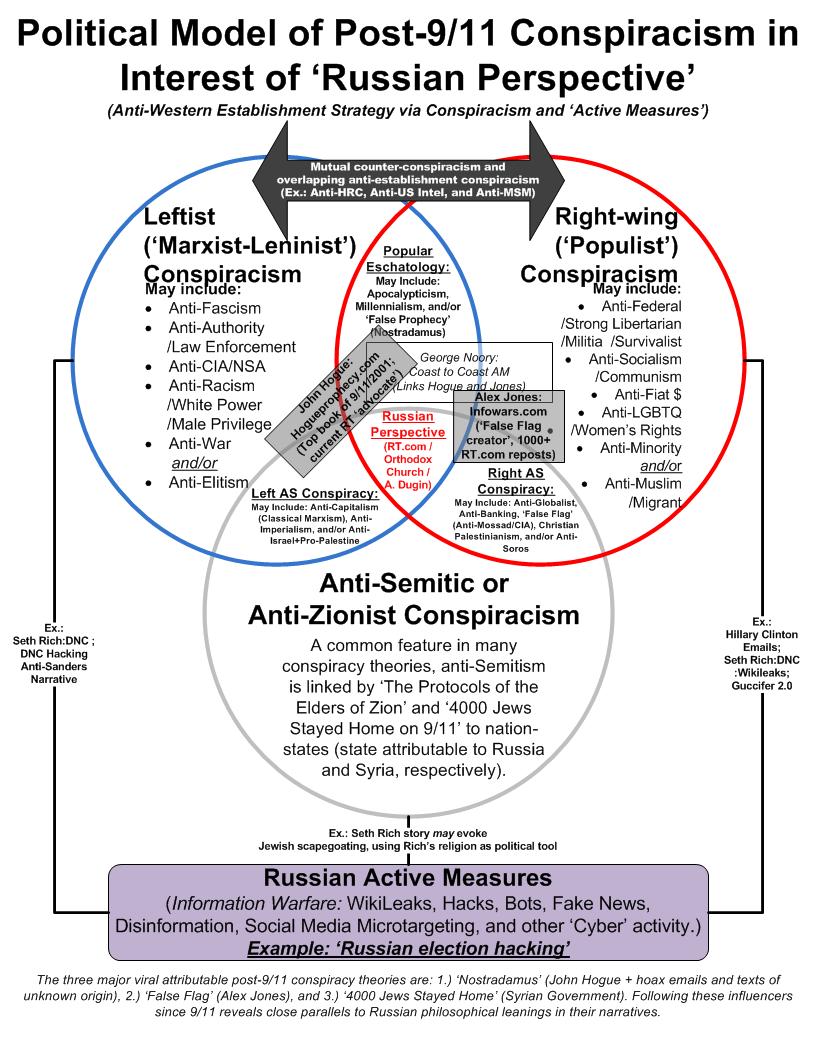 This model isn’t implying all conspiracies are wrong, bad, or ‘delusional’. Some are real. Certainly, I think being opposed to white power movements is net a ‘good’ thing. But I am asserting that those kinds of beliefs in opposition to populist anti-minority conspiracism may form the basis for mutual counter conspiracism and social conflict/discord which can be cultivated in Russia’s political interest (for example, what happened in Charlottesville).

Also, I propose that the basis for conspiracism seems to be opposition to something which is different or perceived as hostile to the group who theorizes a conspiracy exists. Thus, conspiracy theories may be almost defined by what they are against (‘anti-everything’) — rather than being ‘for’ anything.

Download it as a PDF here: Model of Russian Conspiracism

This is a very simple case to make, so I will keep it brief and to the point. The simple fact is that the “4000 Jews stayed home on 9/11” conspiracy theory is provably connected to the Baathist Syrian government and Ministry of Information, and therefore it is relevant for our discussions on modern Information Warfare.

END_OF_DOCUMENT_TOKEN_TO_BE_REPLACED

Interestingly, the origin of the word conjure actually comes from the Latin coniurare or conjūrāre, which means the act of forming conspiracy.

Dictionary.com word origin: C13: from Old French conjurer to plot, from Latin conjūrāre to swear together, form a conspiracy, from jūrāre to swear